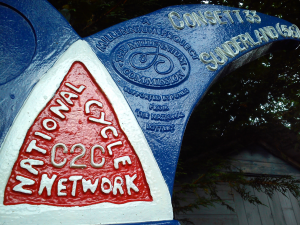 There is a whole world out there.

There was no way this summer was going to be another one spent behind a desk getting more aches and pains from not using my body for what it was designed for, moving! Itchy feet, job dissatisfaction, landlord’s change of life plans and wanting to move back into the flat I was renting… all these and more added up to a summer of adventuring. I was already ‘holidaying’ in the Lake District, so I was in the perfect spot to ride the Northern UK coast to coast.

The Route – Whitehaven to Tynemouth

The brief for deciding the route was straightforward – ride as much of the original coast to coast from West to East with as many off-road sections as possible. Simple. The national cycle network route (NCN 72, Hadrian’s Cycleway) starts in Whitehaven docks by a modern steel sculpture that defines the start of the route, and travels approximately 140 miles East to Tynemouth. 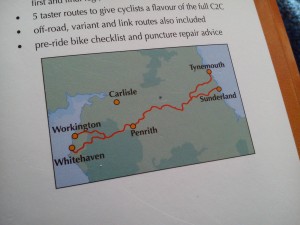 There are options for the purely tarmac rider and options for those that don’t mind a bit of dirt. Bike choice therefore needs a little bit of decision making! A hardtail mountain bike will fit the bill for the singletrack and bridleways, but be a bit of a slog on the majority of the route that is on tarmac. Take an out and out road bike, cover the miles much quicker but miss out on the original off-road sections (and challenge!)… but at the end of the day, this all really depends what you have in your shed – any bike will do! 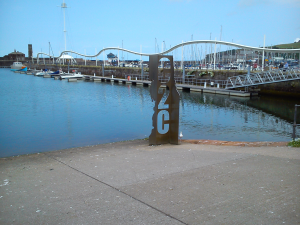 Thirty-something mountain biker known to dabble with the odd road ride now and then (but no lycra ok?!). Knees and joints have seen better days, would benefit from more regular oiling. Overall will probably just scrape through the next MOT. 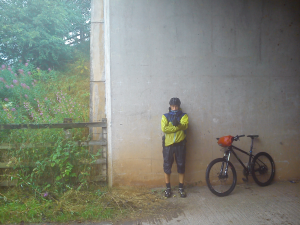 The bike? My beloved Ragley Blue Pig hardtail – the perfect bike in my mini arsenal of two wheeled weapons for the job. No racks, no modifcations, just a drybag mounted on the handlebars and a 30L backpack strapped to the rider. Let’s have it!

I won’t describe the route in any detail as you can buy a guide book for that, but I’ll just tell you about a few highlights along the way. After all, there is a theory that say’s once you’ve read about something your brain will think you’ve actually done it… and you’re less likely to get off your backside and experience it for yourself. 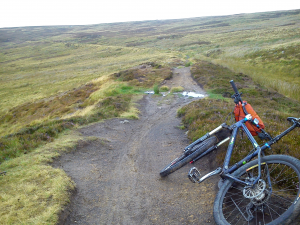 The miles were generally wet. At best damp, and sometimes I’d say they were nothing short of saturated. Still, this is the UK and as we like to tell ourselves wouldn’t be as green if not for the rain. This may be true, but I’d gladly trade a few shades of green for a bit more dry weather thanks! Anyway, ‘waterproofs’ on for most of the journey kept all but the lightest rain out and the sweat in. However, my drybag set-up on the bars was perfect. Good job as it had my clean pants in it. 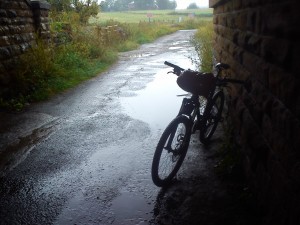 The c2c is very well sign posted and wherever possible the road sections are on traffic free routes. Much of the ride follows cycle paths and occasional b-roads into the villages on route, meaning less worrying about the growing population of ‘phone-in-one-hand-coffee-in-the-other’ road users. You know, the ones who are sorry but “didn’t see you mate” in your retina scorching fluorescent jacket that wouldn’t look out of place in an 80’s roller disco. I digress… 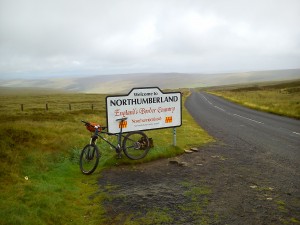 Where was I? Oh yes, following the route is a doddle. buy a guide book with all the important map sections included in, don’t waste money on any OS maps / GPS / Missile guidance systems unless you already own such wizardry. If you are completely directionally inept, then take a friend who isn’t.

For the accommodation, I made my stops in Keswick, Consett and Newcastle. The original plan was to camp but on seeing the weather forecast I soon bowed down to Mother Nature the night before leaving and unpacked my camping gear for the luxury of more clean underwear, a warm top and a book, then booked a few hostels.

Along the route I met other ‘C2C-ers’, one main group who’s partners/wives were ferrying their clothes and gear to the next overnight stop. While there I was Billy no-mates carrying a well stuffed backpack – my backside was definitely envious of their situation. Still, after effortlessly pulling past them several times with my front wheel aloft (N.B some of the occurrences depicted here may be embellished somewhat…), I was proud to be carrying my load myself. Just.

After leapfrogging each other along the route depending on which cafe’s and for how long each would stop for, and a number of old fashioned British ‘Oh hello again..’ exchanges, we finally shared a table and a proper chat at one of the cafes. All it takes sometimes to re-assure you that what you’re doing is actually worthwhile is a little shared enthusiasm and appreciation of an adventure from someone you hardly know. That, and an awesome chocolate brownie.

The Highs and Lows

Hartside. Type II fun. It’s raining hard, ridiculously so for being out on the exposed Pennines on two wheels. ‘Why the f*&k did I say I’d ride ALL the off road sections, no matter what?’. More to the point, no-one I knew was here –‘ I don’t even have to do it, I can take the road option’. But that wouldn’t be cricket old fella now would it? So half riding (optimistic) but mostly push up the seriously boggy ‘bridleway’ (mr. guide book man, we need to have a chat…) for what feels like the same time as it takes to get served in Wetherspoons on a Friday night or the lifespan of a star, whichever is longer. I think it’s the former. 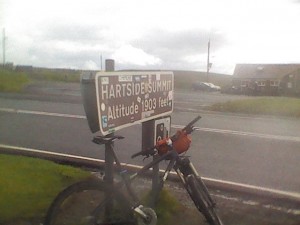 Still, as I sat there in Hartside Café dripping a cocktail of sweat, ditch water and northern rain (the worst type) onto the café floor, I decided to reward myself with a brew and a chocolate brownie. I then spotted a slice of quiche up for grabs, so rewarded myself again. Then another brew and another cake, after all this was the highest point of the entire ride.

The Café’s and Beer

Tea & cake – the athlete’s fuel of choice. Of the numerous places to stop and refuel, one’s not to miss are the previously mentioned Hartside Top Café, the Greystoke Cycle Café and tea garden and finally The Hub café/workshop in Newcastle are all fantastic.

If it wasn’t for the later of these I would have finished the ride on day 3, but at 4pm I did a double take on spotting this place, knowing that if I stopped for more than a quick cuppa the legs wouldn’t want to push on to Tynemouth. And so it came to pass, 3 or so drinks later and a snack or two (I blame the lovely waitress…) it was clear that I was not going to finish this mini epic today. 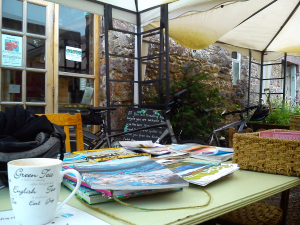 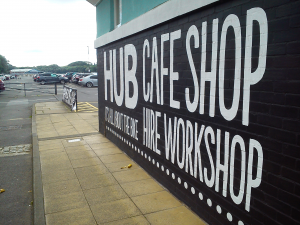 As I retraced my tire tracks back along the Newcastle waterfront, decision already made to find somewhere to stay the night and continue in the morning, I passed groups of people sat at a terrace bar in the sun (yes, it did come out eventually on the ride!). Lucky sods I thought having a bit of a lonely few minutes. “Matt!! Come and have a beer!” – The group I had chatted to a few times at the hostels and café’s had spotted me and invited me over for a celebratory drink, to be followed by a curry later. Well ok then, after all it was only another 12 or so miles to the finish! Lovely jubbly.

With the mild hangover exercised around the streets of Newcastle for the morning, and it was time to finish this thing off. The few miles left would have to be reversed to get the train back to Whitehaven from Newcastle, so off I headed… but not without stopping after just 5 minutes at the Hub Café again for a pre ride coffee and late breakfast!

Fuelled up, the last leg was really felt in the sit bones but it wasn’t long before I was rolling into Tynemouth feeling like a true champ. I soon got knocked down a peg or two though when I completely failed to navigate the confusing layout that is Tynemouth harbour. A bit of faffing about and a few odd glances from the locals later, I was soon on the grassy knoll that plays host to the slightly-less-than-inspiring sign that marks the end of the heroic journey. Made it!

There’s no better feeling than achieving something you’ve set out to do. Ok, this was only a 140 mile bike ride over 3 and a bit days, not exactly a solo polar expedition effort, but travelling from one side of the country to the other under your own steam definitely ticks that achievement box for me.

I started this ride on my own, mostly as I was the only one I knew taking time out from the daily grind. If I waited for the ideal situation of having a good friend to share the adventure with, it likely would never happen. 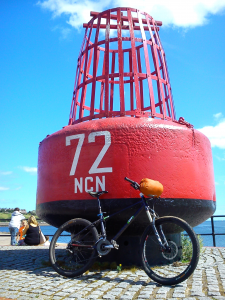 There are plenty of adventures just waiting to be had, they don’t need the perfect situation to make them reality, they just need someone to do them ….So get out there and do one!