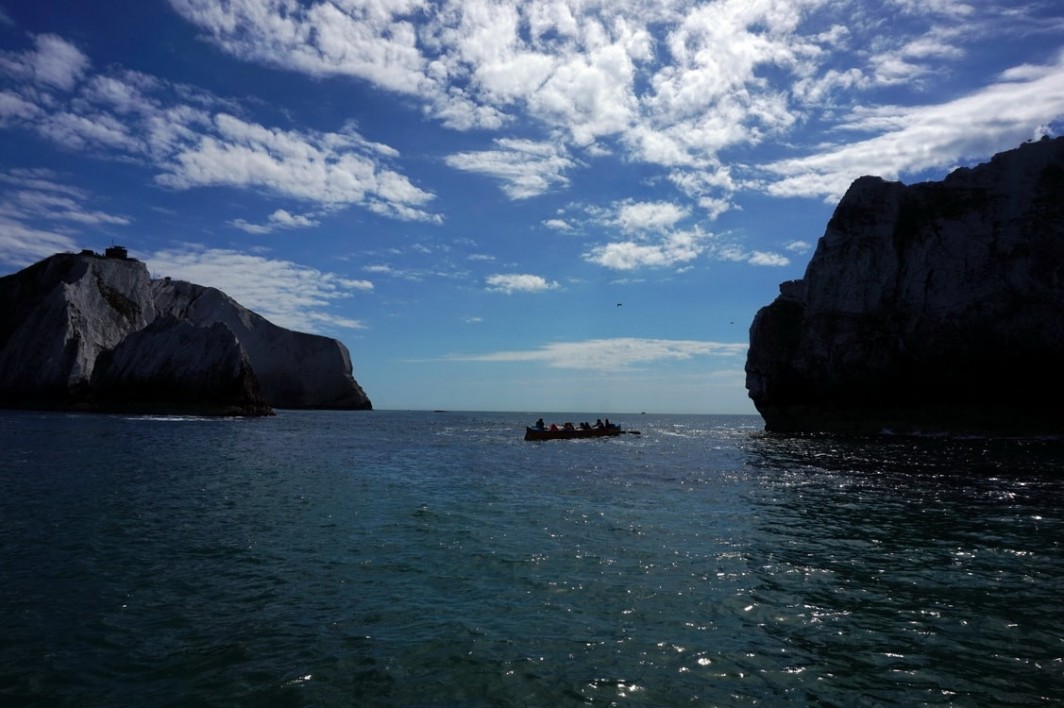 On the 13th of May myself and 7 awesome ladies set out to row around the Isle of Wight.  It’s a good job I can row faster then I can write a blog or else I would still be rowing! But here, finally, is my account of how we got on!

The day began with a 5.15 alarm, not that it was really needed, I felt like I had been awake all night! Some hasty porridge eating, application of suncream and vaseline to a more sensitive area prone to chaff (yes, not the hands!) and a slight disagreement with the hotel reception about bills (its almost as if they sense you are in a rush) and we were off to see our old favourite place – the Spinnaker Tower. Pulling into Gunwharf Quay around 6 in the morning we must have looked a very odd bunch as we went to meet our support boat, clutching bits of sheep (for sitting on), a bucket (use your imagination) and enough water to sink a life boat!

A sunrise jaunt to the start line

Next followed what should have been a gorgeous sunrise boat trip to the start but I have to confess my mind was too full of other thoughts! Suncream application, nervous smiles for photos, more breakfast eating, more Vaseline application more nervous wees, and good luck wishes from friends and family kept most of us occupied. Meanwhile Ruth was making sure she looked the part! 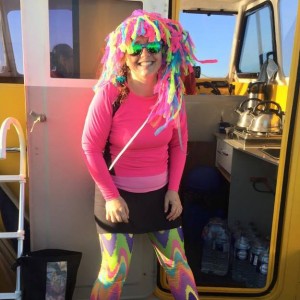 And then it began!

After a somewhat hasty transfer to our home for the day it was time for some rowing! As we pushed off from the support boat it felt amazing. It was a gorgeous early morning on the water, my nerves which had been unbearable for the last couple of days disappeared, I remembered how much I loved rowing, and finally after months of planning we were actually doing this! The next few hours were great, we were rowing well and making good progress. We rowed past a couple of Clipper boats out on training who gave us a cheer which gave us a huge boost, thanks 15-16ers! Then we hit slightly tenser times, it was imperative that we made it past the needles before the tide turned at 12.20 so we upped the pace and cut down the chatter.

The next high was shooting through the needles. Kate was coxing, I was in stroke, the other girls were pushing hard behind me and there were waves breaking on the rocks on either side of our boat, far closer then I felt comfortable with!

With rather urgent commands coming over the radio from our support boat Kate told us she needed us to row really hard (or something along those lines!). I felt like panicking but for some reason started counting sets of 10 strokes instead, which is something the cox often does when we need to pick up the pace. The others joined in and as it got more sketchy we shouted louder until we yelled our way through the needles and away from the rocks! The exhilaration at this point was amazing, we had really pulled together as a team, and met our first big target of getting past the needles before the tide turned. 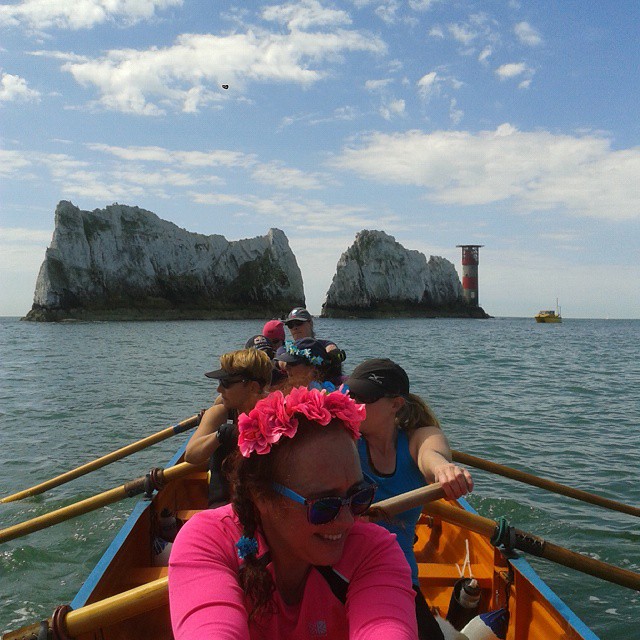 We set off across the bay and here our luck turned, the wind had picked up on us and we were battling 20 knots of wind and big waves and not going anywhere fast. For 3 rotations (45 minutes each) I sat and watched the same house on the shore not being left behind despite us rowing as hard as we could. Where we had been trying to cut across the bay we had to turn and head inland to try to get some shelter from the wind. At this point the support boat wanted to pull us. We disagreed but were told if the wind picked up any more that would be it. Luckily it didn’t! And we finally made it around the next headland. 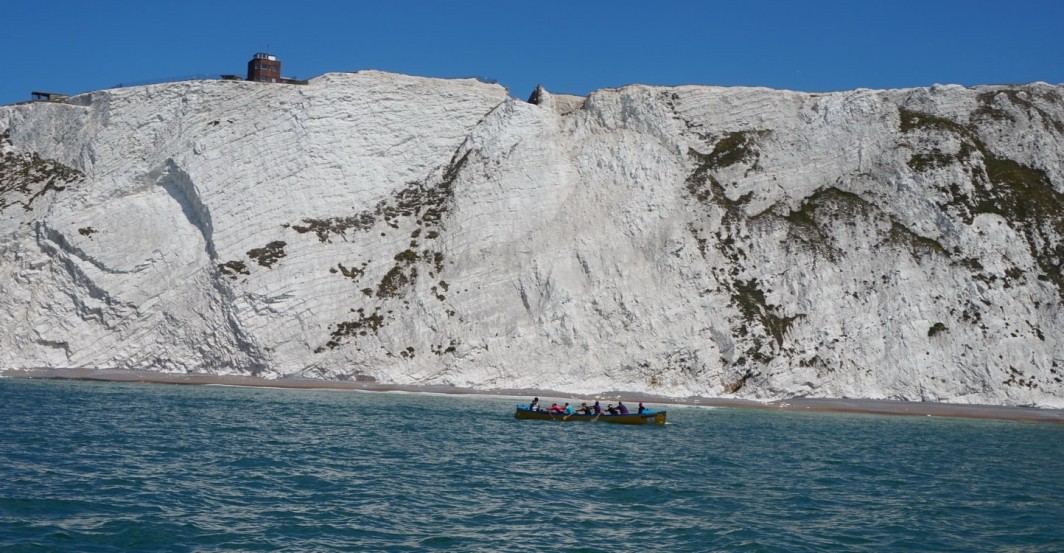 All was looking positive and we were looking forward to the part where we would be ‘rocking along’ with the wind and tides pushing us a was supposed to be the case once we had got around the headland. Fast forward hours of solid rowing later and unfortunately the earlier 2 hour delay had put us behind schedule, the tide had turned and we were most definitely not ‘rocking along’. We now had 3 knots of tide against us.

Talk of celebratory drinks in the pub died as we somehow stepped up the efforts once more despite aching bodies and blistered hands. Sitting in the stroke position I was unable to muster more words then ‘firm 10’ to Hayley who was coxing. ‘Sure?’ she asked, yes I would nod and at increasingly frequent intervals Hayley would cox us through 10 firm strokes. I was fighting back the tears as it dawned on me that we may not make it.

If I shout harder does it make them row faster?

Next up I was coxing and there were once again a few firm strokes called for. Is this actually helping I asked? I got a few nods so I vowed to give the coxing all it was worth, may as well lose my voice as well! Watching Kate, our powerhouse who now in stroke struggling it was clear how much we had all put in.

As my 45 minutes of coxing drew to an end I stripped off my extra layers and had a little word to myself, preparing for one final push.  As we switched around once again we heard discussion over the radio about it being time to stop. To which we took a very grown up response – if we pretend not hear them then they can’t stop us! And so I kept rowing and concentrated hard on avoiding eye contact with Mike in the support boat as he drew close!

After 12 hours or rowing we were asked, then told, (then forced!) to stop rowing for safety reasons as we were  barely moving with 3 knots of tide against us and were fast losing daylight.  For 12 hours I had done nothing but row, or cox whilst trying to eat, drink, transfer water into my water bottle, shout, and put on suncream, often all at the same time. It felt odd to stop.  But having finally stopped and as the tears I had been holding back came the realisation kicked in that we we barely moving and short of staying out in the dark and floating for 6 hours until the tide turned it just wasn’t going to happen.

We had covered 55 miles and were a gutting 5 miles short of rowing around the island.  It was a bitter sweet ending, amazing because we had rowed so far and put so much into it, I felt exhilarated, exhausted and proud of our accomplishments but also gutted we hadn’t quite made it back to our starting point.

The day finished as it had begun, with a boat trip, and this time with a amazing sunset a just reward for a amazing day. 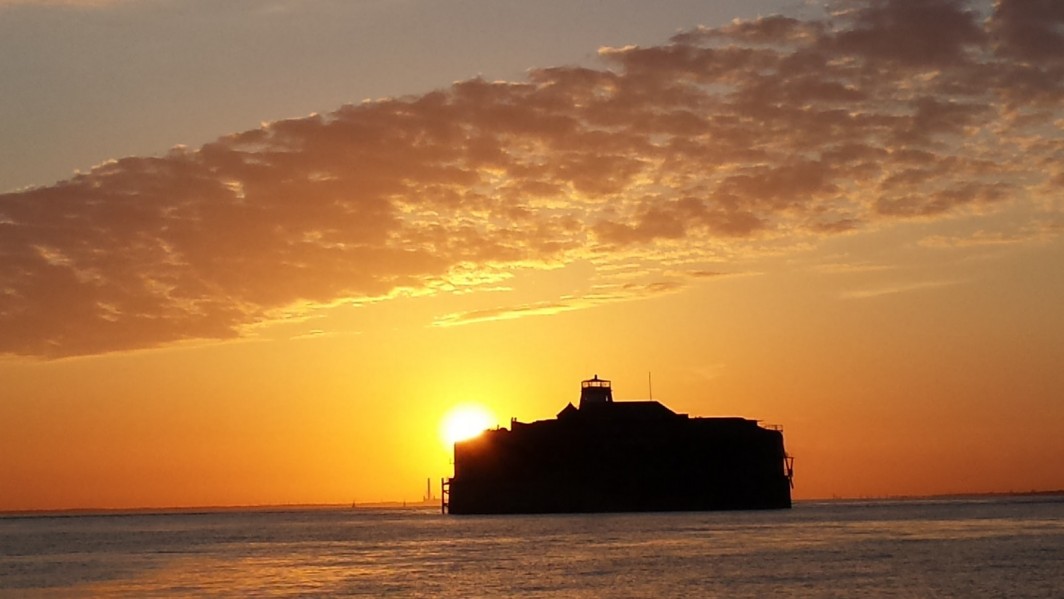